Confessions of a Recovering Spiritual Coward

A few years ago I received a letter from a very good friend of mine.  The letter began with the words, “Dear Tim, I am writing to share with you the gift of honesty.”  In that letter my friend went on to explain that he had been living out a “lie” the entire time we had known each other in college. He was tired of “hiding” and was “coming out of the closet” to confess to me and to the world that he was gay.

I wasn’t really surprised by his letter. In fact, I felt a great sense of relief and almost pride that my friend finally had enough courage to come out and just “be” who he actually was and to stop pretending to be someone who he thought he was “supposed” to be. I had always suspected he was gay anyway. He was and still is a fantastic friend regardless of his sexual orientation.

His confession was complicated somewhat by the fact that he is a Christian. And he still proclaims himself as a Christian in spite of the fact that most of his former “Christian” friends, along with the majority of those within the mainstream Christian community at large, adamantly insist that it is impossible for him to simultaneously be both gay and a Christian.

It’s been several years since I received that letter and my entire view of the world and my understanding of who I am has changed dramatically many times over since then.

So now it’s time to make a confession of my own.

No; I’m not gay. Although, in an odd sort of way, I have to confess that I’m a little envious of my friend, in that I wish that my confession would lead to a similar type of community of courageous souls who have stepped out of hiding to embrace their own truth.

But I doubt that my confession will lead to many rally cries declaring my bravery.

In fact I expect quite the opposite.

You see, my confession is that for almost half a century, I’ve been a coward.

For decades now, I’ve been hiding inside the fear of what my friends and other people around me will think of me if they knew my beliefs, including my doubts and my secretly peeking outside the Christian faith to find Truth. There are numerous reasons that I’ve been “hiding,” but the primary reason I’ve finally accepted is, because I’ve been a coward. I’ve been afraid.

I’ve been afraid that it would affect my job since, until very recently, my work has been inside of or associated with Christian ministries.

I’ve been afraid of being wrong. (And the consequences of being wrong if you’re a Christian can land you in an eternity of hot water.)

The interesting thing about this whole dilemma is that I am not wanting to “reject” Christianity or show how my Christian family and friends are “wrong.” I’ve simply come to believe that–at least in the form that I’ve come to understand it after over 30 years of actively living the “Christian” life–that it doesn’t tell the complete story of Truth.

I feel more in love with God and His creation than I ever have in my life.  But the intimacy I feel and the depths of experiences I’ve had with the Holy Spirit often come from my encounters with things that many, if not most, of my family and friends vehemently oppose and reject as being blasphemous or even demonic.

Reading the Bhagavad Gita, for example, has opened my heart to the love of God in ways that I rarely experienced while reading the Bible.  The gentleness and humility of Krishna with Arjuna still brings tears to my eyes. This wisdom, comfort and guidance I’ve discovered there is something I know I have received from the One True Lord who “IS.” I know that a all-loving, all-knowing, all-wise reality exists beyond anything that can be defined or contained inside “religion.”

Reading the poems of the Sufi poet, Rumi, is another source of inspiration that continues to “minister” to my spirit in a very deep and very real way.

There are dozens more that literally span the spectrum of various spiritual traditions from the study of Jewish mysticism (Kabbalah) to Buddhism to the writings of Paramahansa Yogananda.

The truth that continues to guide me was spoken by Jesus when he proclaimed the two “commandments” that are the basis of all the others. “Love God.”  “Love one another.”  Everything else, he said, is just commentary.

My purpose in all this is a sort of “spiritual coming out.”  For some, this may seem somewhat silly and a bit overly dramatized.

But for others who, like me, have been “hiding” inside a “truth” that doesn’t feel big enough, that doesn’t satisfy all of the questions you have or that seems too narrow for the Truth you know is real, I invite you to come along with me on this journey.

The truth is that I’m a bit lonely and am looking for others to travel with me along this path. In the depths of my spirit, I truly believe that this IS the path that God is calling me to follow.  But I’m not exactly sure where I’m going.

The only thing I’m certain of is that the Lord truly loves me and that He will never abandon me, even if this turns out to be some foolish bunny trail through the woods.  I believe there’s a treasure that he wants me to find.

I believe that He wants others to find it, too.

An odd–and somewhat surprising–outcome of this journey is that I am falling more and more in love with Jesus, even though I continue to encounter His presence in forms outside of that name. I know this sounds really strange and I’m not sure if it even makes any sense.  I seem to be experiencing His gentleness and kindness more and more and drawing into a more real and intimate relationship with Him in spite of my continued discomfort with and disappointment in His church and traditional Christianity.

If you asked me in private if I was a Christian, I would probably say, “yes.”  But I would also explain that I am passionately in love with and have given my heart away to the One True God who “IS” regardless of what name He chooses to go by and reveal Him/Herself as in different cultures throughout time.

That’s probably going to upset a few of my Christian friends and colleagues.

Sorry … no more hiding or lying or pretending.

The truth is, I’ve stopped trying to “please” God. Instead, I’m focused on learning how to “receive” more of His love into my heart and spirit. I’m learning how to be a “son” instead of a “servant.” I’m giving up my cowardice and exchanging it for trust in my Father. 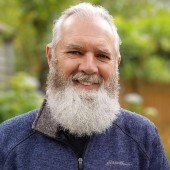 A Cacophony of Thoughts

You Are … A Poem For Lisa